I love new climbs... theres something really nice about finding a path up something thats never been done before. I was lucky enough a few years ago to stumble on a big block in Glendalough, the Hidden Groove, and blitz it of it's easier problems. Although nothing too hard, they were really nice and still attract a few boulders. This Christmas while out for a rest day's walk Caroline's little brother and i were playing the "spot me some big rocks to climb on" game and Hugh pointed out this: 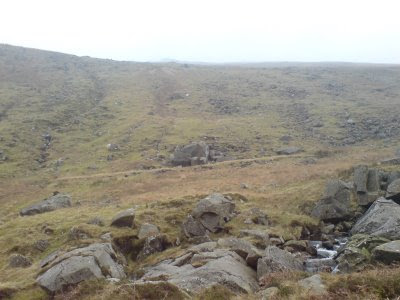 I nipped across the river and took a look. Straight away the Awesome and Huge groove got me excited and before i knew it i had decided to spend the following day on a solo scrubbing and sending mission - i firured i could get 3 or 4 problems outa this bloc! 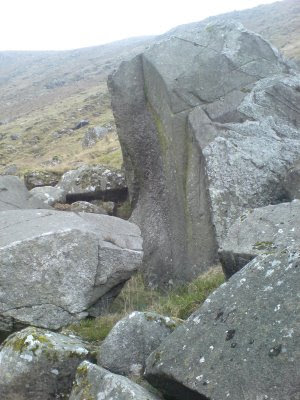 Within a few hours i had picked out and brushed 9 problems! and began to climb, aiming for the easier ones first as Sean and Kev Marnane were on there way and i wanted a spot and more pads for the higher ones! The 3rd problem i tried i underestimated... turned out to be a beautiful beast! Technical, steep, powerful. I eventually sent it after what felt like over an hour of trying moves, brushing more holds, chalking, brushing, pulling .... eventually the most lucky slap and throw for the break held and i could top out happy. Felt hard for me but i gave it 7b... half expecting it to be repeated and downgraded soon.... time will tell. I named it "Hugh" after the little man who pointed me at the rocks in the first place :) 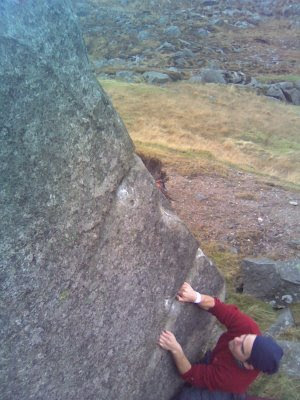 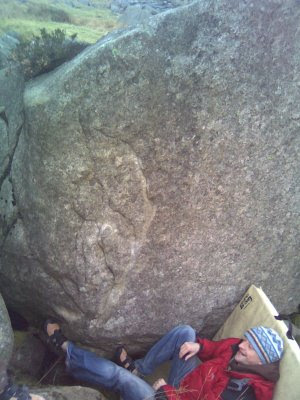 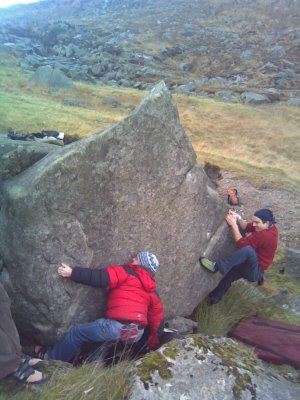 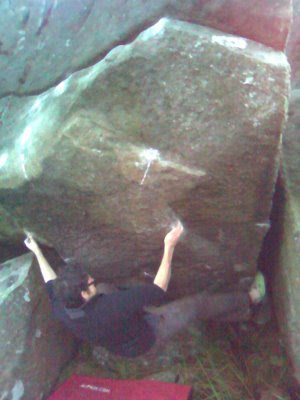 Getting my head round the fact that it’s alright to fail has been a long process. Learning to climb in Ireland is a unique experience and has left me (and maybe others) with some issues I needed to come to terms with before actually starting to climb near my limit (which I still don’t think I have done yet). Basically I always aimed to walk to the base of a route – rack up – and lead it onsight. Sometimes that worked and I’d be chuffed – sometimes I’d wimp out, get pumped, fall or rest on gear. If the latter happened I’d usually pull myself together and frigg my way to the top before my second would follow and we’d move on to another route, returning to the route a few weeks, months or years later to try and tidy up the loose end. The moves were never practiced or honed beyond the bare minimum it took to be able to pass them for the first time, whack in a wire above and continue to the top! Through sheer volume of miles on rock, this approach got me to the point where I had a string of E5’s and a few E6’s onsight under my belt – and every one was a cherished moment of luck and timing and I felt like I was climbing at my limit on each one. No bolts in Ireland meant that I approached sports climbing in the same mindset. No wonder clean 7a’s were such an achievement!
In 2007 I got seriously motivated to try and push myself on sports and set the target of redpointing an 8a. My previous best was 7b+ I think…. Maybe one or two dodgey 7c’s. It was only after I began to work something that I realised just how little time I had ever spent working moves on routes in the past! I tried an 8a – it felt impossible… impassable! I had to pull through whole sections of apparently holdless rock using the draws before eventually getting to the top, a pumped and useless wreck. Smack down! A few days later I returned to the crag to do a neighbouring E5 but after doing it and abseiling down the face the impossible 8a caught my eye again… it’s spell had been broken, it was familiar, I wanted to try it again,,,, just to get a second opinion. This time I managed all the moves but one! Such progress! Wow! 2 more visits and I had redpointed something that I genuinely thought was impossible – I was amazed! And I felt I could climb harder! On a trad parallel, earlier this year I began looking for a line that I could try and work before leading – something harder than E6. I picked Yukon II at Nesscliffe and E7 6b that just doesn’t stop till you top out – easiest move is probably 5c/6a and it was safe(ish). Same scenario again… first try felt desperate. Couldn’t imagine getting to a point of being able to lead it. Next visit I strung it together in two overlapping halves. Next visit I lead it as a warm-up with one fall. A few weeks later without planning it I lead it clean without any need for re-familiarising myself with it’s holds – I just knew I could! Then the summer of work and wet day’s off and doing nothing was followed by a winter of bouldering indoors and outside – all of a sudden I am thinking about Gritstone. The internet is full of reports of visiting Americans cleaning up all the grit testpieces. Compared against the prospect of bouldering on freezing cold crimps – big fat grit slopers just win every time! I’ve had one day out on them and have given in to my selfish impulses and given some time to what I want to do – try some classic E8’s and E7’s on a rope instead of onsighting a load of easier grade stuff (what is expected by my Irish trad beginnings). Surprising myself by linking 2 6c tech routes really quickly and man; the moves were sweet! Like bouldering on a rope but really, really good bouldering! Slopers, tension, gymnastic, dynamic…. Beautiful!

And now this… before christmas I read the following on Dave MacLeod’s blog:

“Committing yourself to climbing a route you cannot touch at present is a special experience that can change your life. Sure you, can dismiss this potential for an adventure because ‘it’s not an onsight’ or whatever you like. Some people will do this because they respond differently to the stimulus climbing gives, others because they are actually frightened they do not have the commitment but won’t admit this to themselves and others because they don’t follow the two rules of this type of adventure.The two rules are1. The chosen challenge has to be genuinely impossible at the time of choosing. If it’s too easy, it will leave you cold. Need numbers? Add four grades to your onsight level.2. Committing yourself means committing yourself. Not trying it and seeing how you get on. Don’t get me wrong, I’m all for quitting when it’s the correct conditions for doing so (see The Dip by S. Godin for advice on this), but most people just quit because they gave up. To underline this, feeling like you might not be able to do it is a necessary part of the plan, not the reason to abandon it. You must do the route, whatever it takes (bar cheating).”

He managed to re-confirm what I am beginning to feel myself. Everything I’ve tried so far (with the exception of the 8b at Dinbren, which I love and will need to invest some serious time into) has come together really quickly. So now I’m gonna bite the bullet and try and project something proper hard (for me at least). Going by Dave’s guideline of adding 4 grades onto your onsight means I should be looking at the E9 or E10 routes… Hmmm! By a coincidence I did find myself looking at a couple in Curbar the other week. “The Zone” E9 looks Awesome! As does “Knockin on heavens door” and obviously theres “Soul Doubt”, “Parthian shot” and “New Statesman” which I’ve always wanted to try ever since watching Neil Bently lead it in Hard Grit! Back home theres the Awesome work by Ricky to inspire… Tolerance, Divided Years, MushroomBoyz, Crystal Methods and the Complete Scream. In Dublin theres Ron’s Indecent Assault in Dalkey. Knowing how much easier routes feel after some invested time I’d like to try Ron’s again and see if it becomes feasible all of a sudden.
Anyway, I’m totally psyched to just try lots of hard routes and become a top-roping bastard for a while (well of anything E7 or harder…

While home for Christmas I managed an incredible 5 days out in Glendalough and one in the Mournes. I got to see what is the nicest piece of climbing I think I’ve ever seen come together in the form of “Leftism” on Big Jane. I tried all the moves but being fat and weak couldn’t link them… but they’re brilliant! It’s got me really psyched for bouldering! I want to apply the same project approach to something and beautiful as the climbing on that bloc… I just have to find something

Anyways, ramble over.... Happy New Year and heres to 2009… an awesome year ahead! 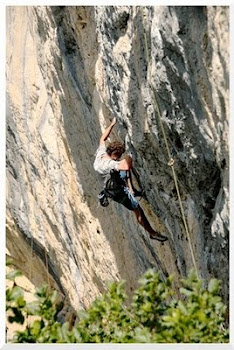